A+ A-
Print Email

How to Make $1,100.00 with Adsense in Just Two Weeks (without SEO, without backlinks, and without an email list) 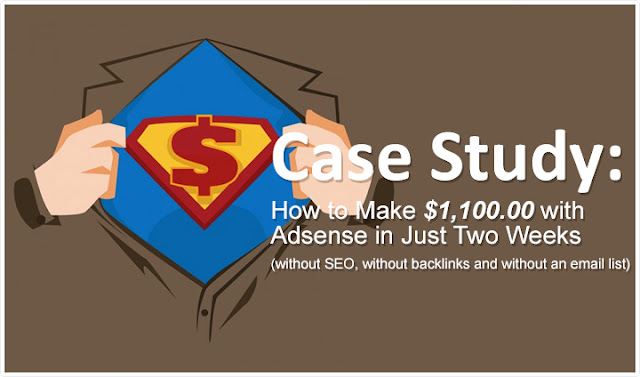 The following premium Adsense method/case study is a REAL LIFE EXAMPLE.
Meaning, there’s no theory, no guessing, no made up numbers like you see on most crappy products released nowadays.
In fact, we personally followed the exact case study and made an easy Adsense income rather quickly.

We will talk about that later in this post.
Before we get into the details, I’m sure you are interested in seeing the numbers first.
Let me show you an example of just ONE post-earnings.
This was over a 2-week span.
This one simple 10 min to setup blog post made over $1,100 in just two weeks.

If you look at the first URL channel you will see that it got 91,064 visitors and 10,666 clicked on an ad which resulted in earning $3,140 on that post.
The person that documented this case study paid 3 cents per visitor from two networks (we will disclose later in this post) at a cost of $2,731.00.
That left him with a profit of $409.00 from Adsense alone.
This is awesome because he also had two other monetization strategies on his page that made the rest of the profit.

That’s not bad for a post that took 10 minutes to create.
Now, he has a lot of other posts running as well.
Using this exact strategy that you are about to discover, the author grew his site to $6K profit per month within 3 months.

Of course, legally we can not promise that you will achieve the exact numbers.
But potentially you can expect to start making $50 – $100 per day virtually from day one and then grow the site over time to earn much more than that.
In fact, lots of people are earning hundreds of thousands per month with this method and some even millions.
The beauty of this system is that you can set it up and then only spend about 45 minutes a day on the site.

When you start to make money from the site you can just outsource all of the work and sit back watching your business grow pretty much by itself.

Alright, so let’s get into the step-by-step details and live examples for you to get started.
So how do people earn six figures a month with Adsense?
What they do is simply build viral content sites such as www.upworthy.com, www.knoworthy.com, www.firsttoknow.com, www.viralnova.com and others like them.
We have covered viral Adsense sites and how we got 329 Free (Instant) Clicks in just Two Hours and Made an Easy $11.12 with Adsense (by a complete accident) in one of our premium posts before.
If you have a Full Access to our premium posts, you will have the access to that post.

The way that most of these viral content websites make money is through click arbitrage.
Click arbitrage is when an advertiser buys cheap traffic from one source, strategically places ads on their site, and makes more in ad revenue per visitor than the initial cost to get the visitor to their site.
Example: It costs an average of $0.05 to get one person to your website. This person shows up to your site, takes a quiz/consumes your content and clicks on an ad. You make an average of $0.20 every time someone clicks an ad.
Of course, not everyone will click, but when the website takes momentum and starts to go viral (on social media), the free traffic will cover the cost and make all the profit.
The key to scaling your site is getting your content to go viral and getting tons of free traffic that clicks your ads.
However, to do that, you must first “plant the seeds” with paid advertising.

BuzzFeed.com was one of the pioneers and is now the largest that kind of website in the world with millions of visitors a month and you can be sure they are raking it in with ad revenue.
The kicker is that these types of sites are super easy to build. 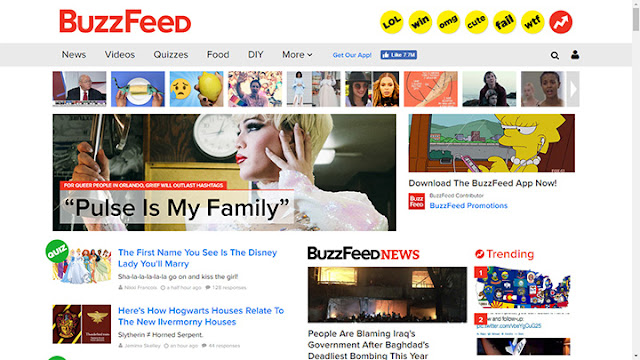 According to Alexa.com, Buzzfeed is 142 most visited website on the entire internet.

But don’t worry, you don’t have to build such a large website to see an income coming in.
The site that is used as a case study is only about 3 months old and it is growing like crazy, why?
Because the content there is proven to be interesting and engaging to visitors and they share and comment the hell out of the posts.

If you will look at those sites, you will see that they are basically scouring the internet and especially Youtube and Facebook to see what is popular at the moment.
They then take the topic or video that is hot and curate it as a new post on their own sites.
Creating the curated content is also very easy. we will show you how later in this post.

Here’s how ViralNova.com monetize their posts: 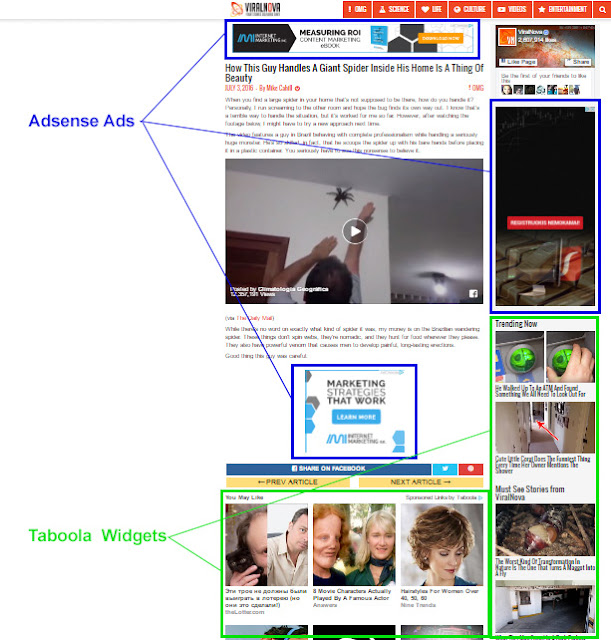 You will see that all of those websites have Social Sharing buttons in front or after the post.
Most of the time they are very big (customized) and have a strong call to action.
The reason for that is that when people finish watching the video or read the article they must have an option to share. Which they do more than you imagine.

The post goes viral and the site gets lots of additional traffic and activity which leads to lots of clicks on ads, which means lots of money for the site owner on Auto Pilot.
Having a Facebook Fan Pages, Pinterest and Twitter pages are also helpful to drive returning traffic to the new content.

Some of these websites have email option boxes, but from our experience, you need a ton of traffic to build a decent email list. So it’s optional.
This is how these websites grew into a media powerhouse. Then they usually sell the site for a massive profit and build another one.
According to Wall Street Journal, (http://blogs.wsj.com/cmo/2015/07/09/viralnova-just-got-bought-for-100-million-has-the-viral-publisher-shakeout-begun/), Viral Nova has been sold for 100 million.
There are many smaller viral Adsense websites being sold on flippa.com even right now.

Getting traffic to these sites is extremely easy.

Since the content is non-commercial, it’s very easy to buy cheap, high-quality traffic on a large scale.
In fact, the scale is so large, that if you are not prepared, you can crash your web hosting service.
What do we mean by “cheaper for non-commercial content”?
The reason these ads tend to be a bit cheaper is that many of these networks don’t allow advertisers to send traffic to a landing page meant to make a sale.
They’re only allowed to link to content.
There are even a few networks that have one rate (usually lower) for advertisers who want to send traffic to pure content and another rate (usually higher) for advertisers who want to send traffic to a sales page.
Content.ad is one of them.
So where exactly the traffic is coming from?
If you go to any of the web’s most popular sites such as Yahoo.com, HuffingtonPost.com, Cnn.com, The Guardian, Slate, Seattle Times, National Geographic etc, you will see that at the end of their content they have content recommendation widgets, which recommends content from other sites.
You have probably seen these before. They are very popular these days.
Here’s the Taboola.com Widget included on HuffingtonPost.com:

The networks used in the case study (see the earnings above) was www.outbrain.com and www.taboola.com.
The author paid around 3 to 5 cents per click from these sites and the traffic is of very high quality.
There is an unlimited amount of traffic from these networks and it won’t dry up anytime soon.
Outbrain.com does around 50 billion recommendations a month which is a shit ton of traffic. Taboola does even more.

When you turn all of that traffic into profit, you are golden.
Using Content.ad Outbrain.com, and Taboola.com you can grow your visitors into thousands in a matter of days.
Now, you don’t have to pay for traffic if you don’t want to.
In fact, we easily got free traffic to one of our viral Adsense websites using two easy to use traffic sources.

You can find the case study if you have a full access.
However, if you are serious, buying traffic will speed up the process.
The best way to get people to see your content is to pay for them to see it, at least at first. Getting guaranteed eyeballs on your site exponentially increases the chances of people sharing your content.
Would you spend $15 per day to earn $50 back? Or spend $100 to make $300 back?
Of course, you would.
Here are four most popular content recommendation networks (Native Ads Networks) to buy traffic from:

Method How to Make $1,100.00 with Adsense in Just Two Weeks Part 2
How to Choose your Viral Adsense Arbitrage website type

Buy a cup of coffee

Enter your email address to subscribe to this blog and receive notifications of new posts by email.